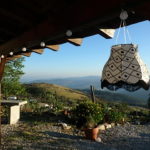 Bar(-n) & terrace
14
Recommend
Share
Tagged in
Noisy, chaotic and rich with colour and life, the weekly Thursday market in Barcelos attracts people from the Minho region to buy and sell all manner of things. You’ll find cheap clothes and shoes, fresh fruit and vegetables, lots of ceramics, lampshades, kitchenware, traditional tools and farming equipment as well as souvenirs and handicrafts. The Barcelos market  started life as an annual event in 15th century and remains an important element of the local economy and culture.   Barcelos is a small town known for its pottery and the most widely-recognized symbol of Portugal — the Barcelos Cockerel.  A 13th-century legend says a pilgrim on his way to Santiago de Compostela stopped in Barcelos and was wrongly accused of theft and sentenced to death by hanging. He was spared when he stated that to prove his innocence, the roasted rooster that the judge was about to eat would get up and crow. It did, and since then, brightly painted ceramic cockerels are sold throughout Portugal as symbols of good luck. Barcelos is also one of the cities on the Portuguese Caminho de São Tiago da Compostela. The tourist information centre should have some pocket leaflets with details of what you can see on the Barcelos stretch of the route. As you’d expect, the main highlights are chapels, churches and bridges, as well as pretty countryside.

Barcelos can be combined with an ocean visit. The beach of Esposende is quite near and popular amongst tourists. If you´re looking for something less modern, you might want to go to Povia de Varzim. (about 30 kms from Barcelos). You will come across Fafe, Guimaraes and Braga on your way to Barcelos.   Traveling time Quinta Rural – Barcelos: 1 hour and 5 minutes by car, 90 km. Google maps
Clients